During the first few days following Russia’s invasion of Ukraine, many organizations rallied together to offer their support for refugees. But few managed to launch a fully operational product as quickly as a group of partners and individuals coordinated by ID Advisory. Within just a few days, they created the first working version of a platform, UAsos.org, matching Ukrainian refugees with those who could offer them shelter and housing. The platform has since then matched more than 4,600 people and is still going strong.

We speak to Jagoda Trela, a Managing Partner at ID Advisory, who coordinated the product’s development, to find out more.

Jagoda, could you tell us how this whole project started? How did you manage to engage so many organizations so quickly?

Sure. It all started the day the war broke out in Ukraine. It was a bottom-up initiative which really arose from a desire to do something for refugees. I was looking at a group on Facebook where people were sharing information about who could offer Ukrainians a place to stay. One person started a thread about the fact that there were so many amazing offers of support here, and that it would be great to coordinate and organize and manage the Facebook movement a little better.

I immediately offered the help of ID Advisory. We are a tax and law firm that specializes in tax, legal, and business issues. I knew we could help with things such as GDPR (General Data Protection Regulation) and other legal apsects relevant here. Since a lot of personal data would be shared, it was very important to take care of the security of the people who would use the future platform. Apart from us, a talented developer from Clevsoft also wanted to help and started working on the first functionalities of a platform. Soon after that, a team from BCG also got involved and coordinated the project hand in hand with us from day one.

Tell me more about how the others got involved.

It all started on Facebook. A developer, some translators, and other people offered their support to build the portal and we arranged a call to discuss how we could begin working on it right away. At ID Advisory, we also have a tech department, so one of my partners was involved from that side.

We were actually ready to go with the portal within two days, but we realized that we didn’t have any cybersecurity measures in place. So I contacted Tomek Karwatka, the CEO of Divante (also a member of Tech To The Rescue Advisory Board), who I knew could help us. He put me in touch with a team that did all the necessary security testing and implementation. He also sent me a list of people he knew who were already working on similar solutions. These solutions were generally just at the idea stage, whereas ours was much more advanced. As I mentioned, we had the first version of the platform ready in just a few days. Later, we worked on automating the platform so that refugees could be matched straight away with the people who offered support.

But then Jacek Siadkowski (Tech To The Rescue) and the team from Pledge for Auschwitz helped to get other organizations on board to join us, which was great. They included non-governmental and local governmental organizations such as: Union of Ukrainians in Poland, Ukrainian House - Our Choice Foundation, Polish Humanitarian Action, Polish Migration Forum Foundation, Szlachetna Paczka, Stocznia Foundation, Union of Polish Cities, Union of Polish Metropolises, Tech To The Rescue, BCG Platinion.

This was a huge advantage which meant that when we officially launched, there were many knowledgeable people on board. 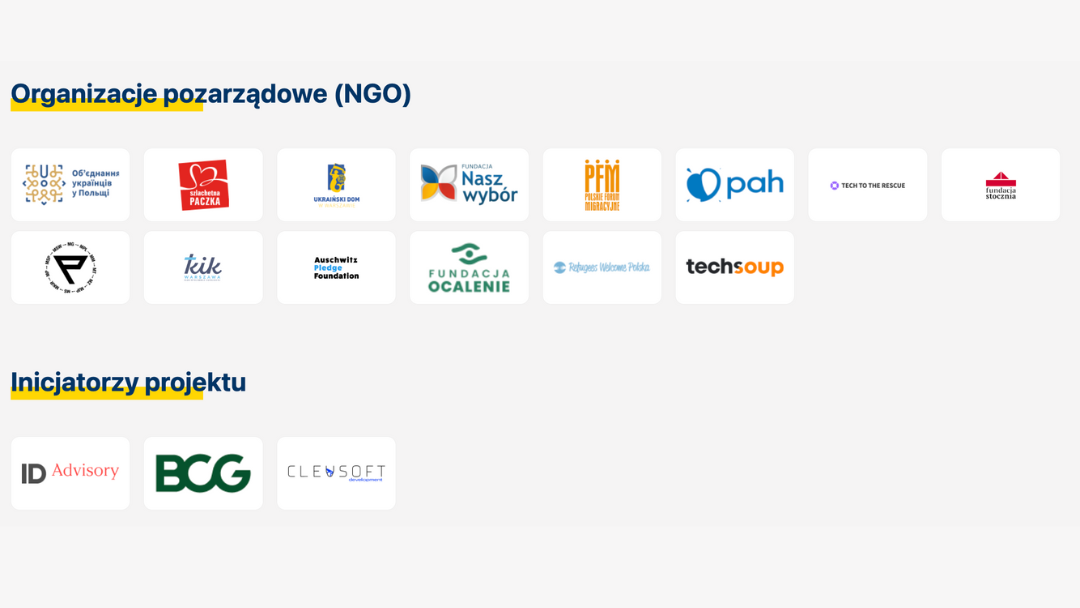 At which stage did Tech To The Rescue get involved?

It was really at the cybersecurity stage, when I contacted Tomek. He put me in touch with Jacek Siadkowski, one of the founders of Tech To The Rescue. Jacek got back to me the next day (which was day 3) and offered the long-term support of a number of tech companies. At that point, we didn’t need that kind of help, as we only focused on delivering the first version of the portal. But after that first version was released, we worked with Tech To The Rescue very closely, not just on IT support, but also from an organizational perspective. Jacek’s experience and expertise played a really crucial role here.

Excellent. So I have been on your site and I have seen that more than 4,600 refugees have found homes thanks to your platform. You also mentioned that there is now a built-in matching function. Could you tell us a bit more about how that works?

Sure. So the person who can offer accommodation fills out a form about what exactly they can offer: the number of rooms, the number of people they can accommodate, whether they can take children or pets, and other important details. On the other side, the refugees seeking a place to stay fill out a ‘mirror image’ of the same contact form - i.e. they indicate how many people there are in their group, for how long they need a place, whether they have children, etc. In the background, our system matches these people where the criteria are the same, and allows them to contact each other directly via a messaging feature.

And what’s your roadmap for the future? I know previously you also talked about expanding the portal to cover transport, for example?

Our main goal for the immediate future is to hand over the project to a charity or organization that would be able to develop it further. We need someone to keep it going - not just for the next few weeks and months, but possibly for several years. At ID Advisory, we are looking for the best ways to run and develop it.

After discussion with several NGOs, we realized that developing the security of the platform is the main priority. This needs to happen before we focus on other features. We are working on an ID checker that scans all the relevant passports and other documents to prove that the people using them are actually who they say they are.

Do you have feedback from people who have used the platform?

Of course. Many of the people who have hosted refugees have spoken about the positive experience that they have had with our portal. There was even a lady who talked about us in an interview on  TV. We receive a lot of positive feedback both via Facebook and email.

We also get recurring users who come back to us, when the family they hosted has moved to another location or become independent. They want to offer a place to stay again.

Could you tell me what surprised you the most about the project? After all, you were at the center of the whole operation.

I was truly amazed by the sheer amount of people who wanted to help. The first week the project started, my phone kept ringing. I joked that my phone number must be on a billboard somewhere in the center of town. But it was awesome how much support there was, and still is. Of course, things have slowed down a bit, but there are still many people who want to continue to support us.

And the media coverage has been instrumental in making sure that the right people know about the platform. One newspaper even referred to us as a ‘Tinder for helpers’ because of the matchmaking aspect.

And how did you coordinate the work of so many people? Because that’s no easy job!

From the very beginning, we coordinated the project with a fabulous team from BCG but it certainly wasn’t easy. It’s fantastic that there were so many people who wanted to help, but organizing them requires a lot of commitment, particularly in the face of constantly changing targets. In the early days of the war, it still wasn't clear exactly what the needs of the Ukrainian people were. The situation was very dynamic and we were challenged by NGOs telling us that our platform needed additional features we had not even considered. Now that things are a bit more stable, we often look back at that period and consider it a time of real ‘crisis management.’

There was also a change of plans in terms of the release. Initially we were going to release the basic version of the platform in a few days. But we ultimately decided to wait until the matchmaking tool was ready and I think that was the right decision. We later worked on improving it to ensure its effectiveness. For example, we added additional features to ensure that a single woman offering up her home wouldn’t be matched with 2 or 3 men.

The amazing thing was that everyone managed to put aside their daily work and fully focus on the project. This allowed us to have team calls several times a day during the first week to make sure that we delivered everything on time.

Your firm’s day-to-day operations are in law and tax, so you really went above and beyond your usual scope of work. Is this kind of charitable support something that is part of ID Advisory’s values?

We have been doing it since before the war broke out. For example, back in January, we supported The Great Christmas Aid Orchestra by auctioning off workshops with our internal specialists.

Outstanding. And is there anything else you would like to say about the project, which we haven’t already mentioned?

Yes, I’d like to stress that we were one of the organizations involved, and the work of all the other people and companies involved should not be underestimated. All partners were all crucial to the success of the platform. For example, there were developers recommended by Tech To The Rescue and worked on the platform almost 24/7 in the first few days. One of them was Łukasz from a company called Clevsoft. BCG was also heavily involved and supported the development side. We coordinated the whole project, but it wouldn’t have happened without other people involved. BCG team, Clevsoft, Tech To The Rescue and Auschwitz Pledge Foundation support was invaluable.

You can see how the platform works here.